Enjoy the little things in life, for one day you’ll look back and realize they were the big things. That’s what I am thinking right now while writing this blog with a grateful but sad muzing gaze. I am already back in Belgium, and with pain in the heart I had to leave Mauritius after a wonderul three weeks. Unfortunately, I did absolutely not manage to keep up with my blog, as I was too busy having fun. But I’ll keep my promise and write some after-travel memoires and reflections, while letting Mauritius mesmerize me over and over again… ❤

It’s a little bit paradoxical to hear from a giant tortoise that you have to enjoy the little things in life, but it is exactly what I’ve learned the other day from him while visiting his tiny island habitat in the Indian Ocean, when he secretely whispered in my ears: A great life isn’t about great huge things, it’s about small things that make a big difference. I think that what he ment to say is: it’s not because you seem to be giant, that you can do great things, buy you can still do tiny things in a great way. And sometimes it are exactly those little things that manage to occupy the biggest part of our hearts. Or in short: the versatility of ‘small’ and ‘large’ in a spiritual nutshell is where my mind wonders when seeing a giant tortoise on such a small island in the Indian Ocean. 😉 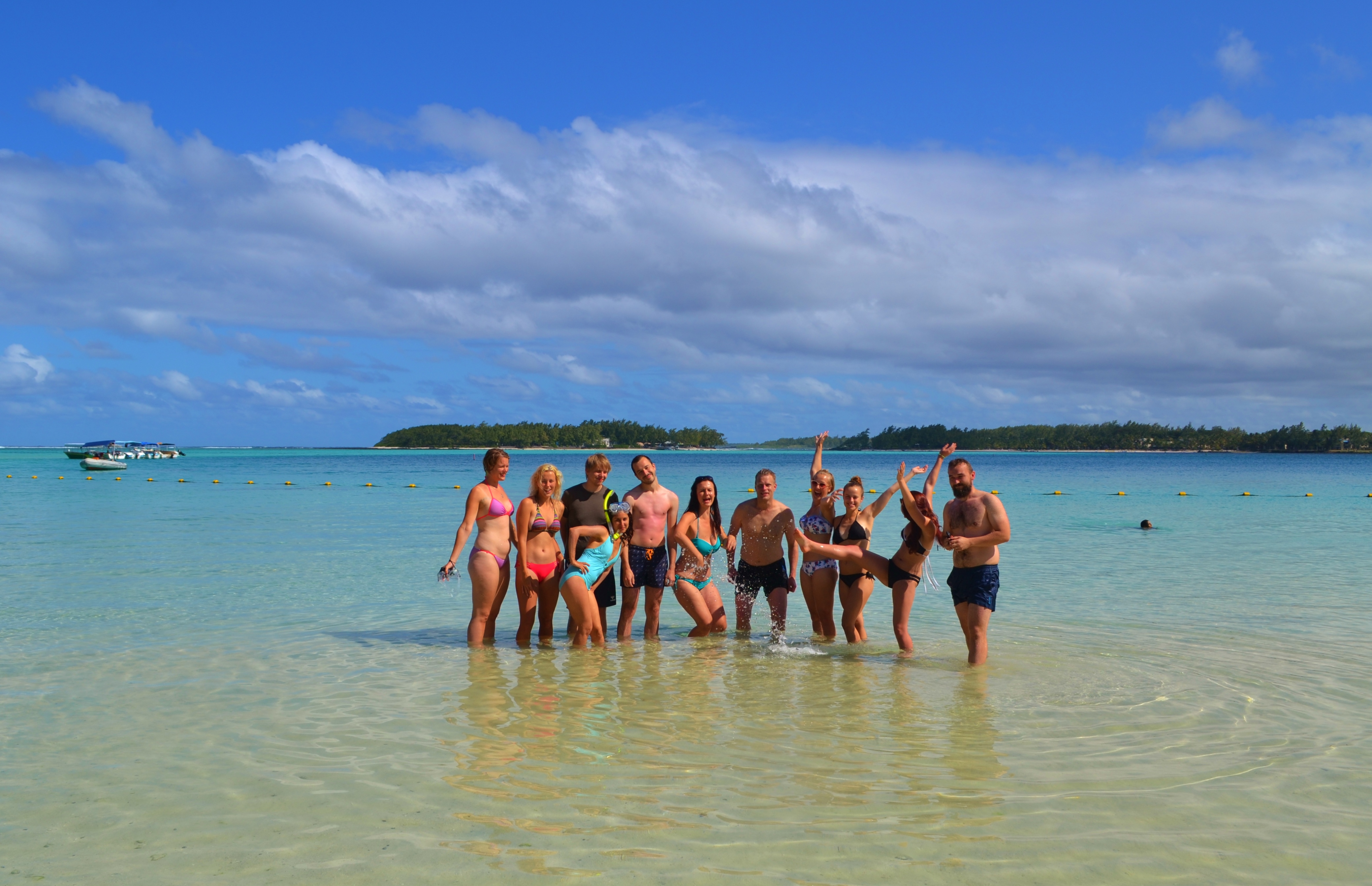 We didn’t know we were making memories. We just knew we were having fun…

It was Thursday, the 23th of July, when we had a new field trip with the Ethnographic Field School to the south eastern part of the island again (noth so far from Mahébourg which we had visited the other day). On today’s agenda was Activist Efforts in Mauritius, a break at Blue Bay and visiting the Mauritian Wildlife Foudation at Île aux Aigrettes.

We started with an almost 2-hours drive, but by now we got so used to our driver that we were actually becoming close friends, exchanging phone numbers, life histories and music from our iPods with him. To be honest, the poor man had no other choice than surrendering to our (damn cool) Western party music, but the good thing was that he liked it. Or at least that what it looked like, because he always turned the volume up. And he started to initiate us to Mauritian music as well, so we ended up exchanging our musical preferences while ‘cruising’ through the island, with tropical beats on the background… There is actually one particular song that I really want to share with you, because of various reasons…

Zoli Mamzel, is a Créole song, which means “Jolie Mademoiselle” (Pretty Lady) and it is written by Gary Victor, a cute Mauritian guy with a big heart. He has an adorable voice and addictive flow which enables you to experience instant happiness, and it is a sing-along-song…. It is thé song that everyone on the island knows, it was a big summer hit, and it’s lovely! Okay, just listen and try it: ”Hey zoli mamzel,..Beh zoli Nation pas gagne droit tousel,..dans gauche, dans droit, fodei gueter couma li aller, La haut enbas, fodei gueter couma mo ..?” (I give you the acoustic version, but if you like it more up tempo, try this one: https://www.youtube.com/watch?v=1_ZuCGllSrk

Ok, back on track… Our first stop was Blue Bay, a highlight of any visit to Mauritius! Whether you are on an educational trip or not 😉 Blue Bay is located in the south eastern part of the island, not too far from the international airport. While you drive to it, you can enjoy some of the most wonderful scenery and landscapes of Mauritius. But then when you arrive at Blue Bay…. I mean, it is obvious where the name of this place came from: such a blue bay! This is the kind of place where you realize: yes, yes, yes, I am in paradise! Look at all this beauty our earth has to offer us: white sandy beaches, turqoise blue water, small green islands, …. No wonder that this place is a favourite of both tourists and locals!

The best things in life are for free? All beaches in Mauritius are public!

After having a coffee at a local bar with one of the students, and enjoying a lovely chat, I went to walk around the bay for some photographing and observation of the locals. It is amazing to see how the locals are also enjoying this piece of paradise. The hindus for example, come to pray at the beach as well. Of course they won’t wear bikinis, and so as a tourist you should dress and never go monokini (a bikini is provocating enough!), but they wear sari’s. I have no idea what kind of rituals they do, but involves some prayers with water, flowers, and offering of food to the gods. Beautiful hindu religion! It adds this extra value to the place, which makes it so relaxing at the same time. Just staring at it with this ocean background made me feel in a meditation-like mood. If that makes sense?! 😛 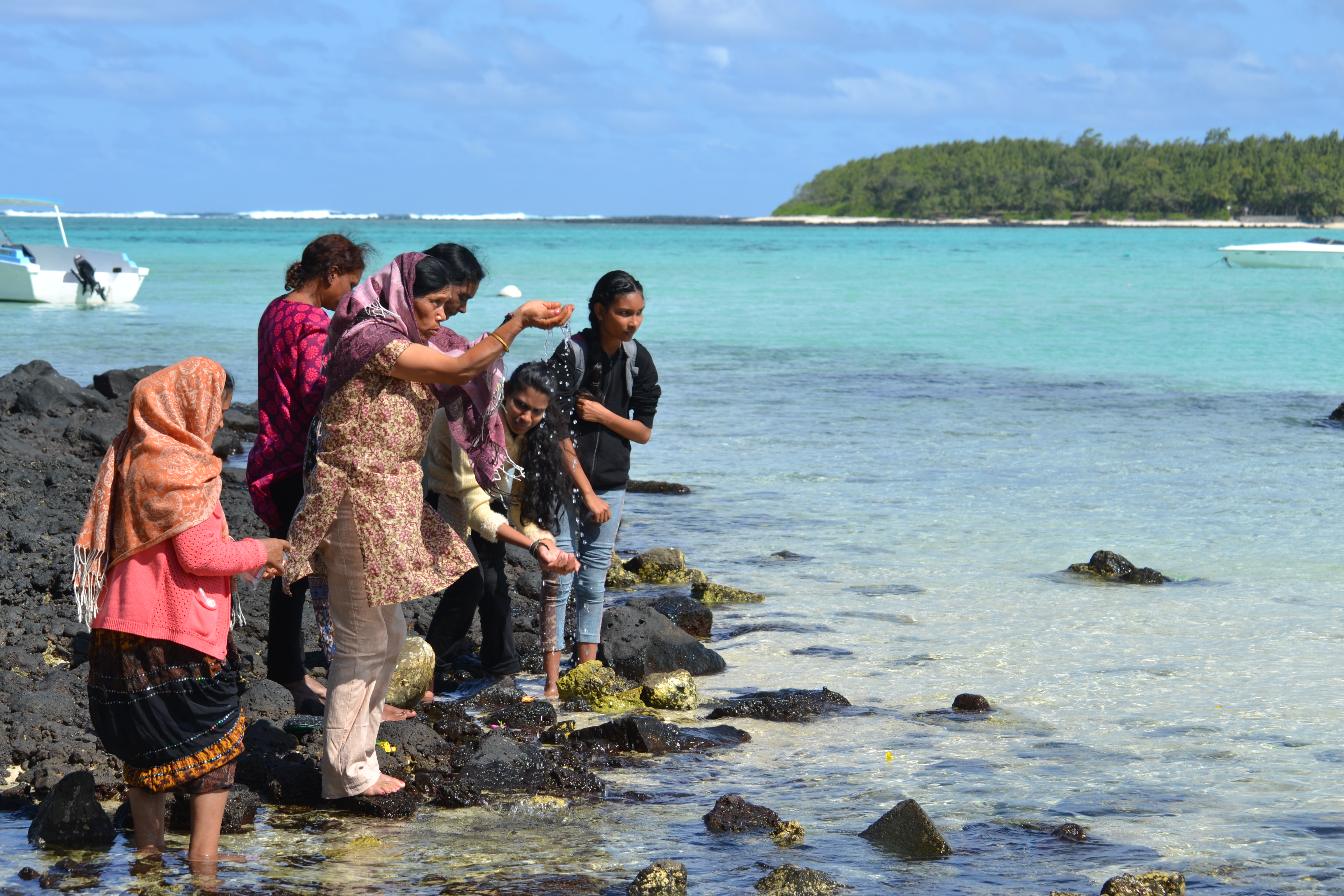 Some people look for a beautiful place. Others make a place look beautiful.

After spending some time at the beach with my fellow students, swimming, snorkeling and feeling over-blessed in life, it was time for a more educational turn of this field trip day. We took a boat trip to Île aux Aigrettes, a nature reserve, where we would visit the Mauritian Wildlife Foundation. We got a guided tour by Nethi Chunwan from this organization, and he showed us all the island. And with all the island, I mean, the whole 27 ha. 😀 And with the boat trip, I mean: a 5 minutes ride to cross the 850 meters of ocean between the coast and the island. Lol.

But what makes Île aux Aigrettes so special, is that is made up of coralline limestone, whereas the mainland of Mauritius is of volcanic origin. And that’s why you can find some special nature stuff there, I mean: exotic animals and native plant species. It is good that this place is kept well maintained as a nature reserve, and clearly a lot of effort was put in the intense conservation of restoration of this bit of forest and the reintroduction of these rare species, such as the pink pigeon (yes, it exists!), the Mauritian Fody (a red-head bird), the Olive White-eyes (Birds with white circles around their eyes), some special orchids (“Oniella-polystachys” if that rings a bell), and the Aldabra Giant Tortoise (yes, the one who taught me a lesson… 😉 ). 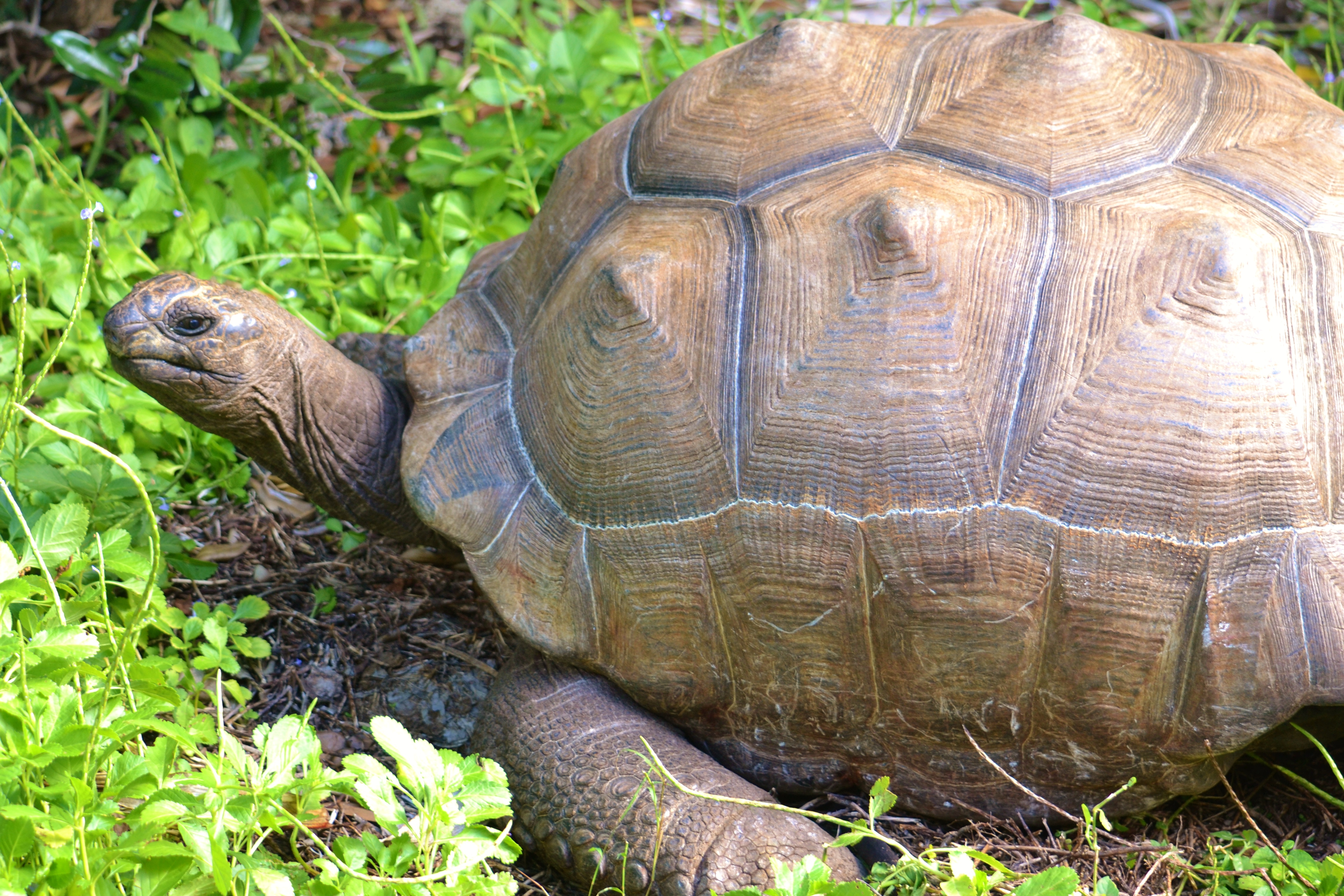 My favourite, however, was the Ornate Day Gecko, a typical specie of Mauritius and Madagascar that feeds on insects and nectar and has a total length of only 12 centimeters. But it absolutely mesmerized me because of its bluish green, blue, brown, cyan, white, turquoise and red colors. And no, I couldn’t bring it as a pet, because it needs a temperature of +/- 28°C and…. They are protected, of course!

After being introduced to the unique flora and fauna, the restoration work on the island, and some knowledge on the local area and the history of the island, we were taken back on a short boat ride to Pointe Jerome, where our trip started. Well, this was an amazing place worthwhile visiting! Bye Île aux Aigrettes, take good care of your beautiful self! ❤ 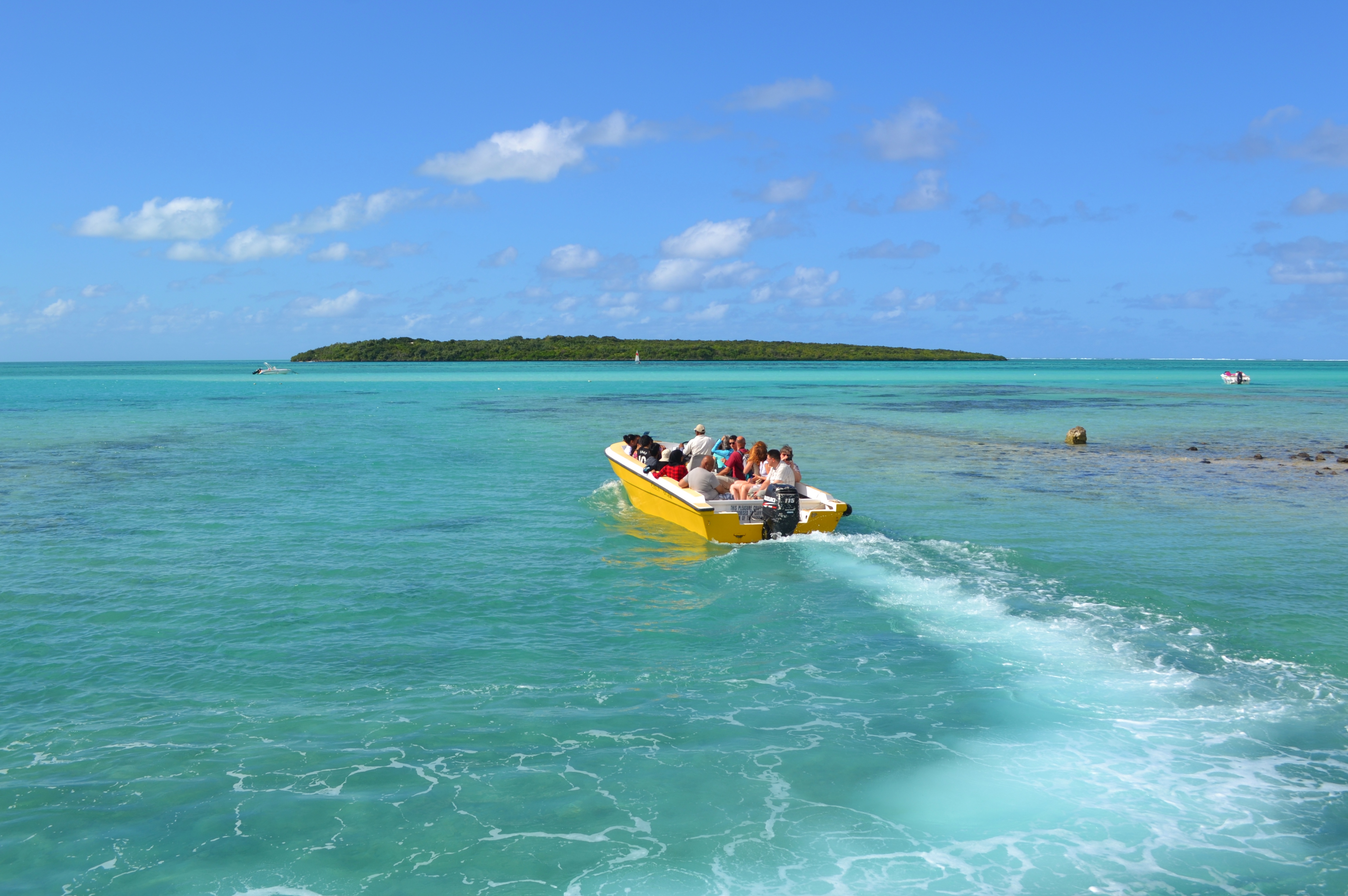 A short boattrip in paradise. Off to Île aux Aigrettes!

After this amazing day, we drove back home to Pointe-aux-Piments. And because home is where the heart is, I spent some time with my very best local family. Eating together, talking about our days, and feeling loved!

I ended the day with some writing on projects, making apointments for interviews and going through my pictures of the day. What a great time!

Friday, the next day, back to school… Back to reality! Classes in the morning became quite a habit at our temple based Summer School University. We had class in the morning about how to write up our papers, because slowly but steady each students began to have some ideas and data for his/her project. Yes, yes, I keep saying it: we do actually work between the hours of fun in paradise!

Some publicity for our Ethnographic Field School in Mauritius!

After school, I went with my roommate to the local tailor shop, which was actually just a house with some very lovely ladies who had great fun dressing us up, and especially watching us getting dressed and undressed, admiring our white skin and making jokes. A great experience to get measured for a tailor-made sari by the way, especially when the seamstress appears to have no measuring tape. The Mauritian way! Lolll 😀

Getting my Sari tailored…

In the afternoon we had ‘free time’ to spend working on our projects, and so I had planned 2 interviews with informants for my anthropological project. I met one man and one woman in town, and spent an hour with each of them. A great and interesting excercise, but also very exhausting!

At 5 PM we had an evening session by Dimitris Xygalatas, our professor, about how to write an Ethnographic Paper, followed by a session on how to write a Scientific Paper (yes, those two are not the same!) by his Phd-student, Martin Lang, and another session by Michaela Porubanova, one of the other instructors, who is specialized in Psychology, and she did some cool experiments with us.

We finished the night of ‘classes’ eating in a Chinese Restaurant, while watching a documentary ‘Stealing a Nation’ (2004) about  Diego Garcia, another small island in the Indian Ocean that belongs to the Chagos Islands, and which was claimed by The United States to build a large naval and military base there. Ever since 1971, the population of this British Indian Ocean Territory was removed (deported) to Mauritius and the Seychelles. This caused a lot of controversy, together with the other dubious military activities of the US… This was really something I didn’t know about before, but which is very interesting knowledge, and very sad at the same time. Makes me think about “Make Love, Not War”, and how idealism and realism don’t walk hand in hand with each other most of the time. You should just check it out and reflect upon this, by watching this short movie (or watch the full movie that we have seen):

But then, finally… After some heavy stuff… It was time to let go all the stress and prepare for the second weekend, which I started in style with some of the students and instructors at our favourit party spot: the Banana Beach Club in Grand Baie. Party along all night long… And even though we had other awesome plans for the weekend… YOLO, because no one looks back on their life and remembers the nights they had plenty of sleep! 😉