Day 3 of my Galapagos trip, and again time for a daytour. Today the island of Floreana was on the schedule. At 8AM I left for a 2 hour boatride southwards from Santa Cruz. The sea was rough and a lot of people were sick on the boat. Me, I wasn’t because I am just feeling great at sea!

The island of Floreana is inhabited, but it has a long history of strange people and there is only one main road in which they all live. The Galapagos Islands captured the world’s attention in 1934 when they were the site of an international scandal of sex and murder.

Unsolved Murder Mystery: The Galapagos Affair – “Who Killed “The Baroness?”

In 1929, German doctor Friedrich Ritter abandoned his practice and moved to the Islands, feeling he needed a new start in a faraway place. He brought with him one of his patients, Dore Strauch: both of them left spouses behind. They set up a homestead on Floreana Island and worked very hard there, moving heavy lava rocks, planting fruits and vegetables and raising chickens. They became international celebrities: the rugged doctor and his lover, living on a far off island. Many people came to visit them, and some intended to stay, but the hard life on the islands eventually drove most of them off.

Heinz Wittmer arrived in 1931 with his teenage son and pregnant wife Margret. Unlike the others, they remained, setting up their own homestead with some help from Dr. Ritter. Once they were established, the two German families apparently had little contact with one another, which seems to be how they liked it. Like Dr. Ritter and Ms. Strauch, the Wittmers were rugged, independent and enjoyed occasional visitors but mostly kept to themselves.

The next arrival would change everything. Not long after the Wittmers came, a party of four arrived on Floreana, led by “Baroness” Eloise Wehrborn de Wagner-Bosquet, an attractive young Austrian. She was accompanied by her two German lovers, Robert Philippson and Rudolf Lorenz, as well as an Ecuadorian, Manuel Valdivieso, presumably hired to do all the work. The flamboyant Baroness set up a small homestead, named it “Hacienda Paradise” and announced her plans to build a grand hotel.

The Baroness was a true character. She made up elaborate, grand stories to tell the visiting yacht captains, went about wearing a pistol and a whip, seduced the Governor of Galapagos and anointed herself “Queen” of Floreana. After her arrival, yachts went out of their way to visit Floreana: everyone sailing the Pacific wanted to be able to boast of an encounter with the Baroness. But she did not get along well with the others: the Wittmers managed to ignore her but Dr. Ritter despised her.

We were welcomed by a happy group of sealions and the Galapagos National Park security guards, who as always and everywhere checked our bags for fruits, nuts etc. You cannot import anything in these islands to protect the nature!

Sea iguana near the peer

Right after arrival we were brought by ‘ranchera’ (kind of pick up truck) to the higher part of Floreana, it was a beautiful road with a lot of sightseeing.

We visited a protected area with giant turtles and finally I got to make a picture with these massive animals. This was definetely one of the MUS TSEES on the Galapagos trip. By the way, I am posing behind a 90 years old one…

Me with the Giant Tortoise

After that, we hiked around and got a lot of information about the history of Floreana. Apparently there were pirats, but also some Inca-wise art is found which made the people believe that there were people since long time ago. 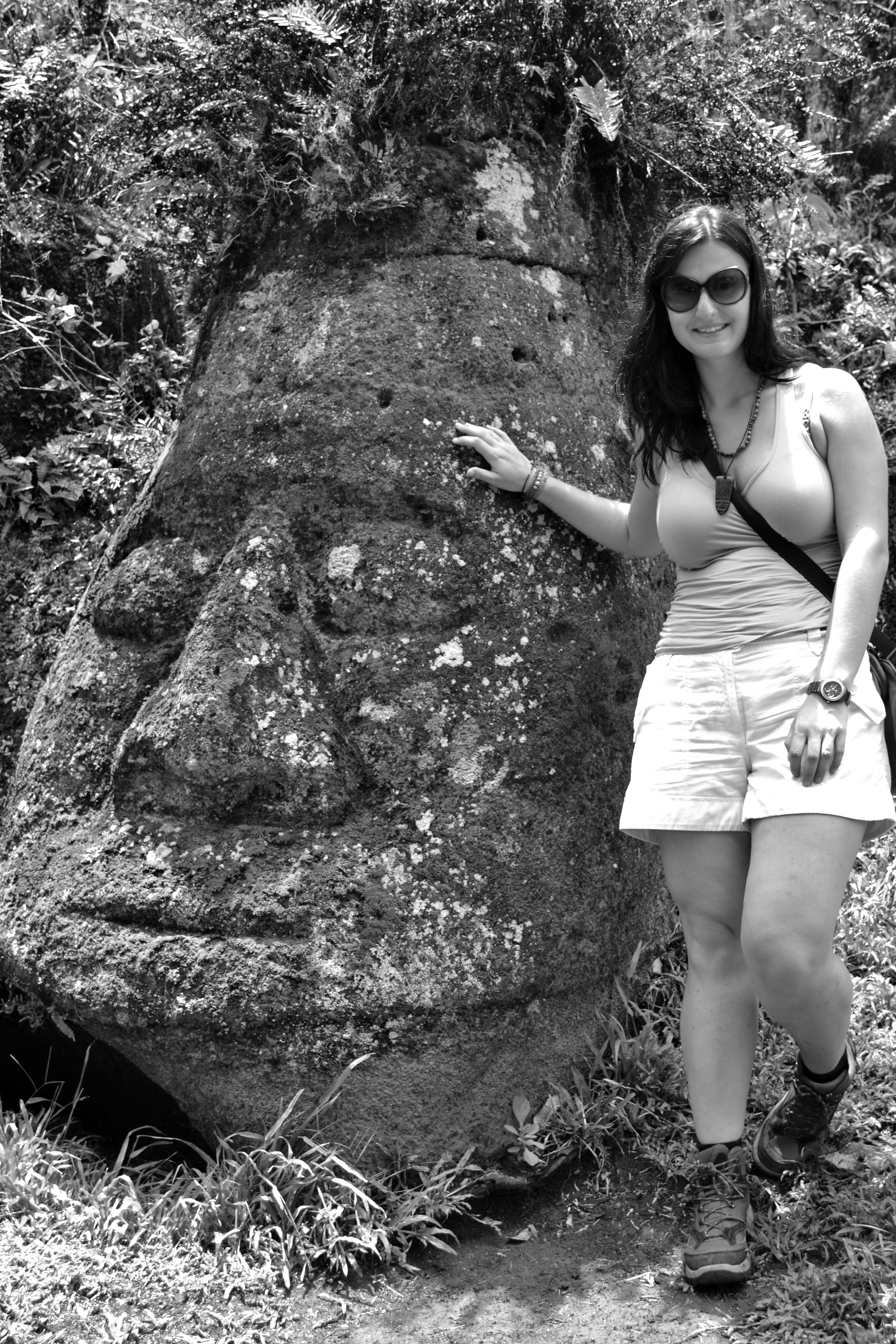 Inca looking sculptures during the hike

A lot more then that I don’t remember, because I was more busy with enjoying the surroundings then listening to this boring stories. (hihi, honest)

Hiking in the highlands of Floreana Island

After 2 hours of walking, we returned to the car and just when we wanted to head back, the tire was broken. ‘No pasa nada’ (no problem), we just waited until it was fixed and continued with some delay. I asked the guide why he did not call somebody to send another car, but there was no phone signal… Of course! There is no service, no WiFi etc. on this island!

During lunch in a local restaurant I found out that there were 3 Belgians in the group, but I absolutely did not feel like socializing with ‘my’ people as I do not really like to see Belgians in other countries. I know, I am a WEIRDO! And so I did as if I did not know, and I did not talk to them in ‘our’ language. Lol, afterwards I felt quite creepy as I could understood their conversations but they did not know that I could. But oh my god, I really hate this typical travellers questions: ‘Where are you from? How long have you been here? Where did you go before and where are you planning to go next? …’ Bla bla bla

After that moment which turned out completely AWKWARD, we headed to Playa Negra, a black beach where we could enjoy some snorkeling. I felt like having a nap on the beach and enjoyed some music. It was just chilling and relaxing with the sun burning me again as usually… 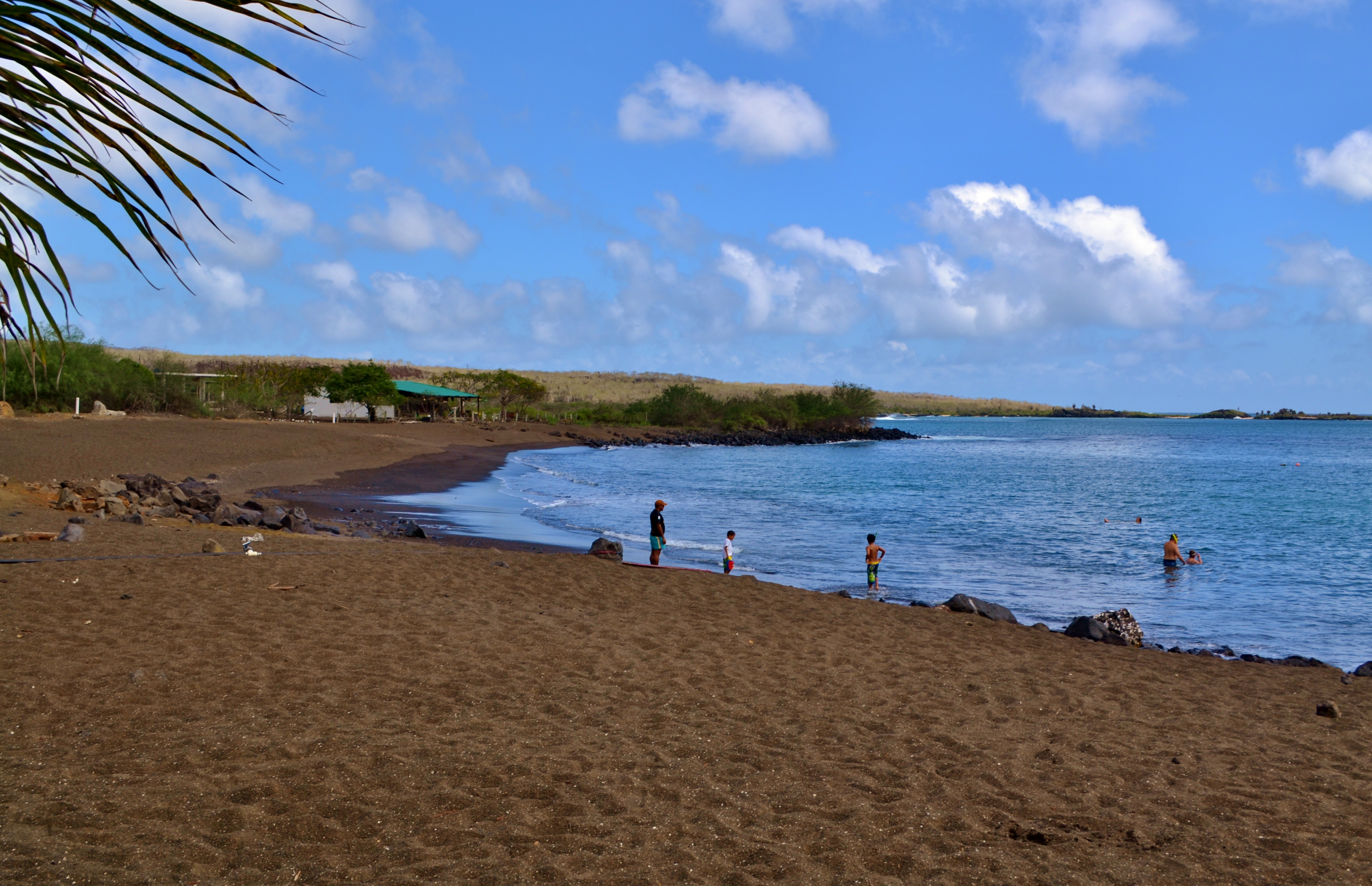 Around 3PM it was time to head back to Santa Cruz by boat, and we were lucky to see some Galapagos Penguins right on the cliffs where we left the island. 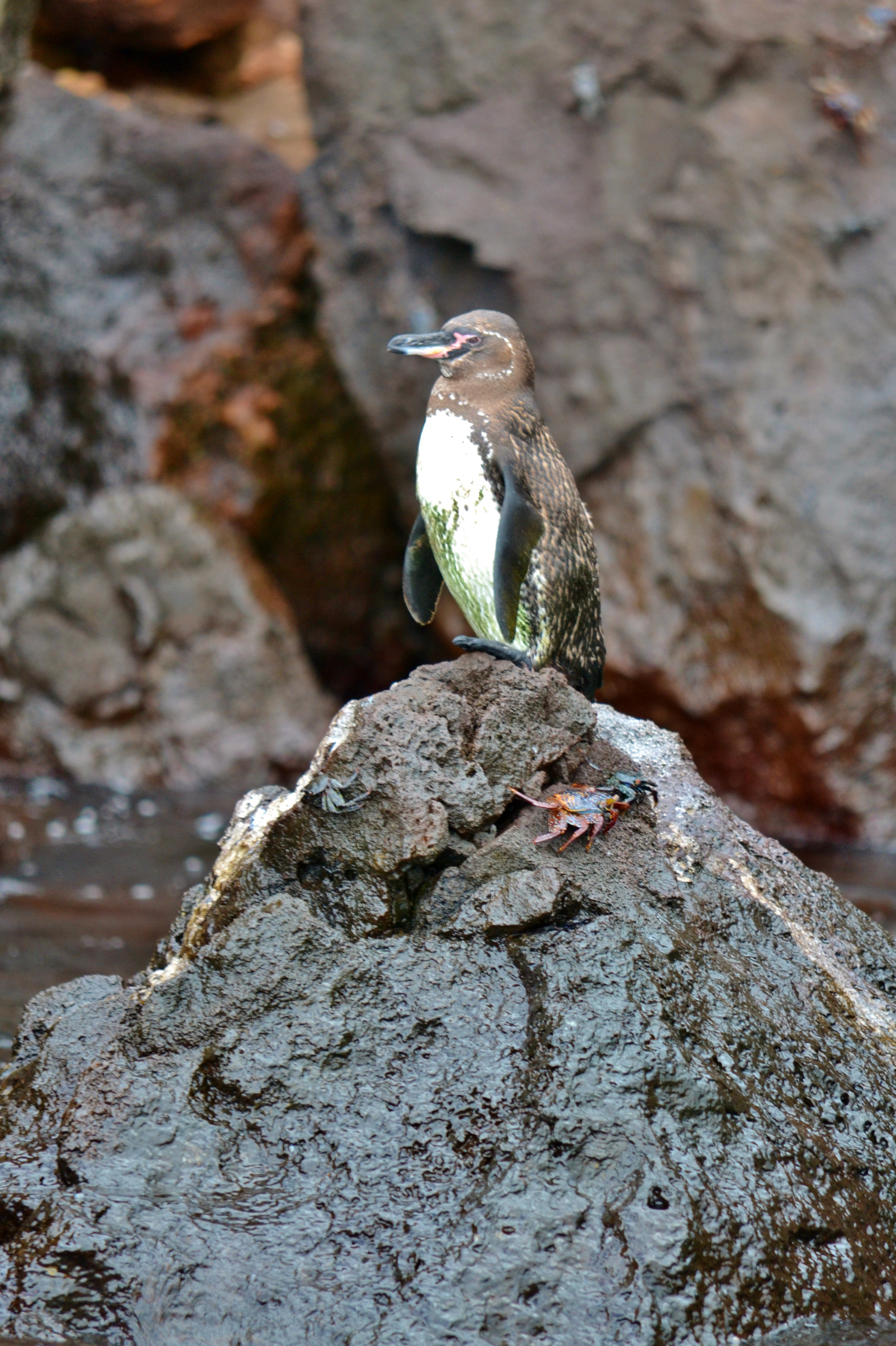 When  I arrived, I bought myself an icecream on the peer, headed back to the hostal for a shower and bought some post cards to send home. Hope you received them, Mommy, Abdenbi, Kim, Karine, Linde and Grandparents!

I went to bed early as next day I had to leave to Isla Bartolomé at 6AM! But more about that later… Sorry for keeping the blog posts so short, but I’m trying to keep you up to date faster to keep up with my busy travelling schedule!

Next stop: ISLA BARTOLOMÉ (4) –> Keep following for the next destination