After taking a 2 hour boat ride from Isabela to Santa Cruz, and another one from Santa Cruz to San Cristobal, I had finally arrived back at the island where my Leap group was volunteering.

During my stopover in Santa Cruz, I had the best fruit bowl with granola for breakfast ever, and visited the Charles Darwin Research Center, as it is not so far walking from the peer and it is a must-see in the islands, I was told. However, it did not really impress me a lot. After the death of Lonesome George, I do not think that there is that much more to see in the station. Or at least not things you can’t see anywhere else on the islands, such as iguanas and tortoises.

So I walked back quite quickly, went to the internetcafe to do some work for school, had a salad for lunch (yes, a healthy day) and bought some last souvenirs on the avenue. Then it was time to board the next ferry, which would bring me in another two hours to San Cristobal.

I did not have a reservation or a fixed plan, but I was not planning to return to Hacienda Tranquila because I wanted my two last nights to be spent as a holiday. So when I arrived at Puerto Baquerizo Moreno, I went to a hostel called Leon Dormido and asked if they had a room. They tried to sell it for $30 a night, but I got it down to $20, convincing them that I did not have more budget. I got a very nice room with airconditioning and hot water, and I had to walk 2 steps to be on the main street. And there was WiFi, even in the room. Perfect!

After putting my laundry in the shop, I met my group by coincidence in town. We had a drink together and decided to meet for dinner in a restaurant. It was really nice to spend that evening together with them again and I enjoyed a chicken burger. We watched the sea lions playing on the beach at night and then we headed back seperately to our accommodations. 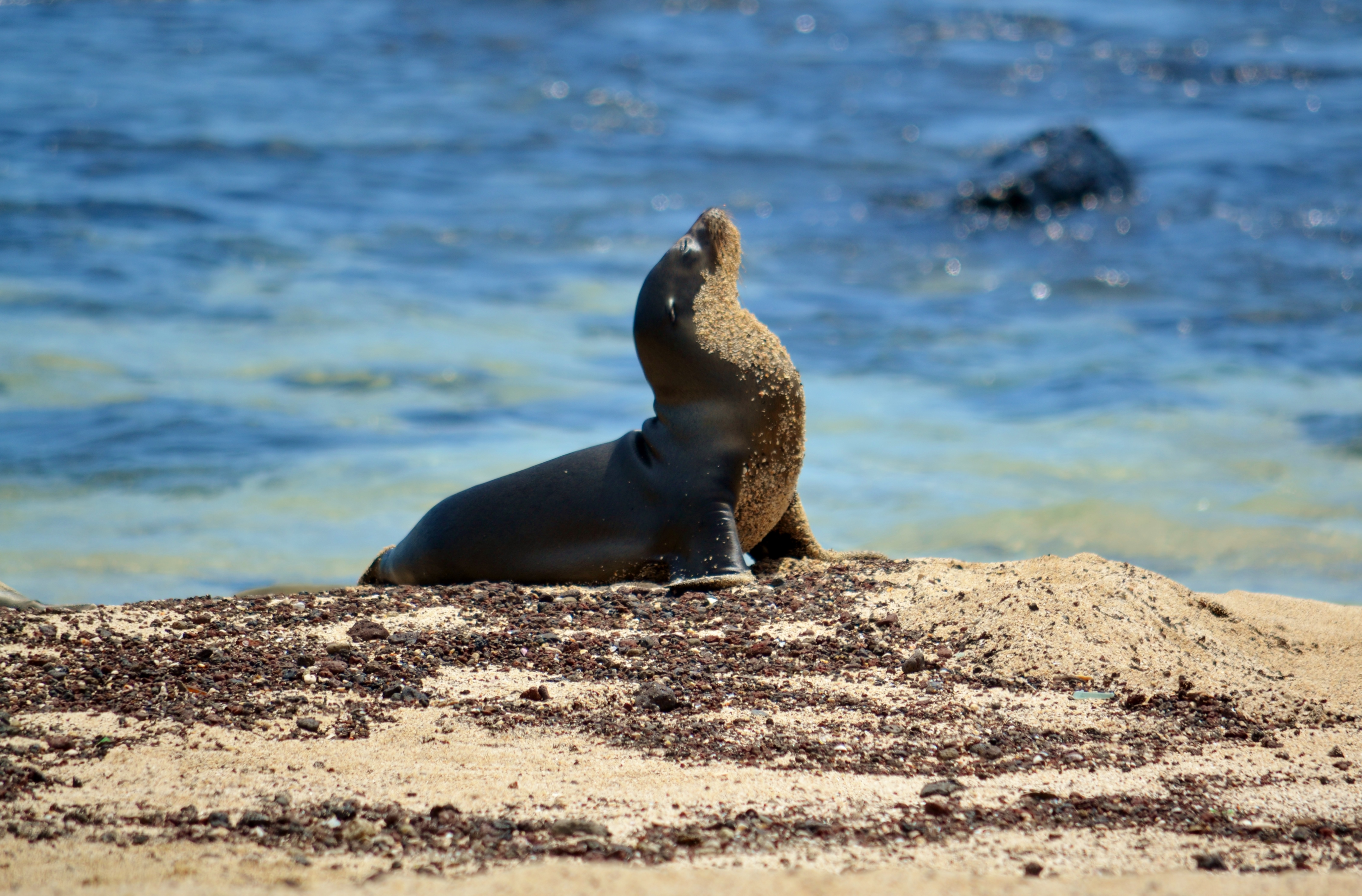 Thursday 8th of May it was my last full day on the islands, and I had a free day to do whatever I felt like doing. I slept later then my usual 6 o`clock, had a good breakfast and was planning to go searching for `Fundacion Nueva Era` as Yanapuma was interested in a collaboration with them. It felt like a great coincidence, because while I was eating breakfast on a terrace, some poster crossed my eye and that was it! Right there was the foundation. So I went inside, explained myself and 5 minutes later I had an appointment with the boss for the next morning. Great because that ment work for today was done…

I went for a walk in town, bought some souvenir, had a freshly squeezed juice and did some reflection on my time in the Galapagos. It had definetely been a great journey so far. And to give myself some last sun rays before heading back to Quito, I headed to the beach. I walked via the coast to Playa Mann, which was surprisingly relaxed. There was a beach bar, again some sea lions and some trees to look for shadow when the sun is too hot.

I also visited the opposite Interpretaton Center of San Cristobal, which was the most interesting museum of the Galapagos Islands, to my opinion. After traveling a lot, I felt like all the pieces fell together and I got answers to questions I did not think about. It was free entrance and I have learned a lot of things about the history of the island and the income generation of tourism for example.

The most interesting information of all… – Interpretation Center

After the cultural visit I went back to the beach and watched sunset. Enjoying to the fullest my very last moments here. I went to the hostel for a shower, and had something small for dinner. As the Galapagos came to an end, it means that another Phase with my Leap volunteers was coming soon. Tomorrow I would meet them at the airport to fly back to Quito and start the Adventure Week. I was definetely nervous for that, but come on up… Break a leg!

Well, that was it. The end of my Galapagos Dream Journey. I had spend 3 weeks on the islands, felt like the luckiest girl on earth for having this amazing opportunity to visit the islands on a budget and was absolutely sure about never ever ever forgetting this in my life. I had seen the most amazing animals on earth, met great people, found new volunteer projects and did some volunteer work myself as well, was more tanned then ever before, spend too much money but oh so well spend so I could not care, I felt great because life was good and with loads of energy I was heading back to Ecuador`s mainland, ready to give the best of myself for another 4 weeks with The Leap.