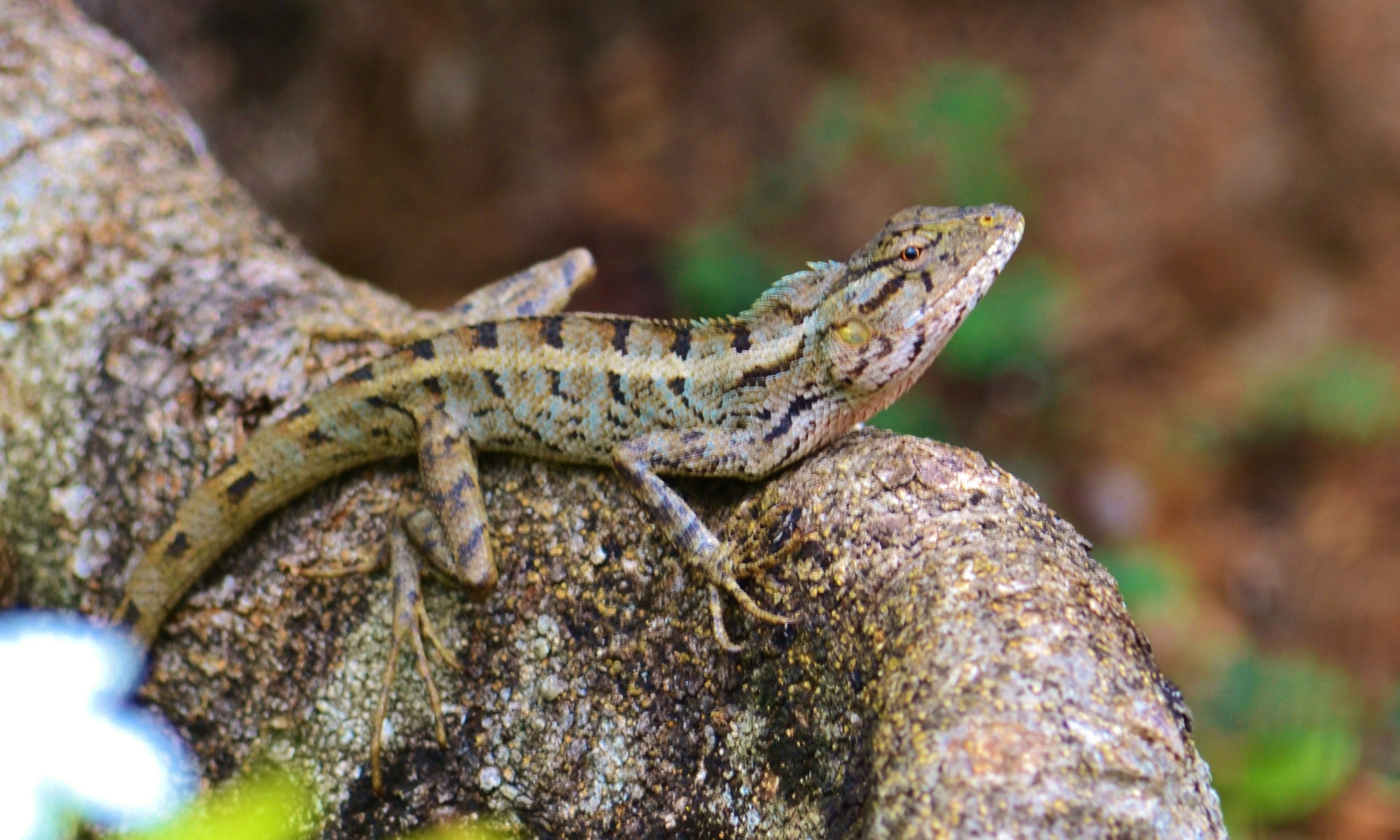 Waww, I have only been here for a few days and so much has happened already! I feel like a cameleon, adapting smoothly to my environment. So: where to start?!

It is the one that is most adaptable to change.” – Charles Darwin

Sunday I arrived and I got to know my host mother a bit. She speaks some French but mostly Créole and it is obviously not always obvious what she is trying to say. She is very nice and kind, but also a little bit possessive in her own unique hospitable way, as she is cooking dinner and makes me eat whatever she likes. She made me eat the weirdest things, fortunately she is Hindu so I am not supposed to eat meat (lucky vegetarian I am!).

I was very happy to meet my fellow roommates after a few hours of being drawned into a little culture shock, having no internet, no phone, no toilet, no shower and so on. Emily is an American student who is staying at “grandma’s place” (as she calls it) as well, and Francesca is also an American student who is staying in the house next door, where I go to shower and use the internet. The house next door belongs to the children of ‘Grandma’.

Where I stay there is no bathroom at all, unless you consider the open air sink as a bathroom. So I have to walk through a garden and knock at the other houses door, which is not really a problem actually. But not really a luxury either! :p In the shower I got company of Mom and Daughter Cockroach, so yes… I have already made some friends here, and built up a reputation as murderer! 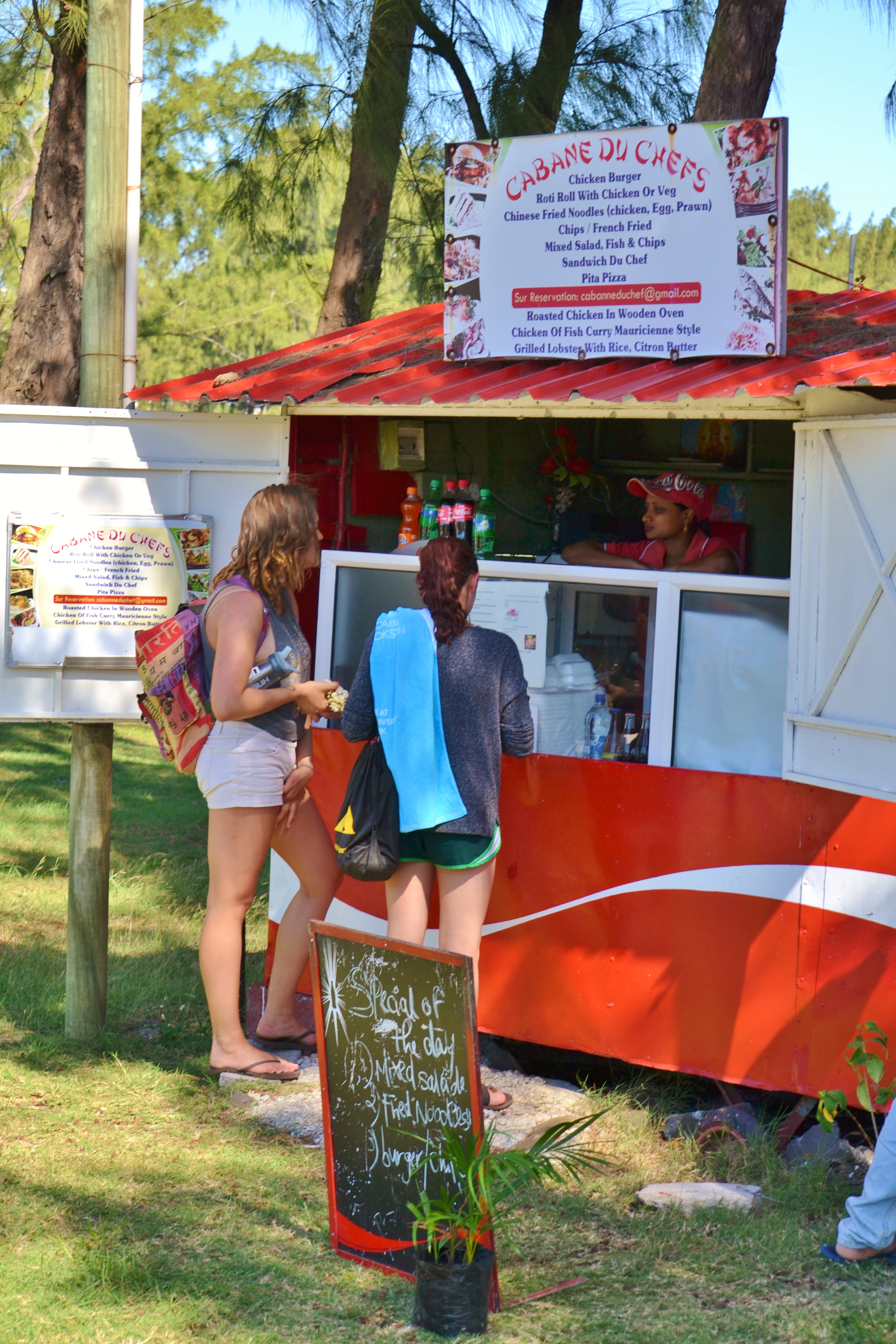 Going out to get some streetfood with my roommates

But enough about the house and the weirdest food being served there, I am here for Ethnographic Fieldwork, not for wishing I was at the beach all day! And dear friends, I hope you don’t keep thinking that that is (the only thing) what I am doing here. Anthropologists do have a hard life! 😉

Because as fast as I arrived in the house, so fast was I gone again. After a terrible too sweet and pink drink that I was offered to drink as a way of welcoming me into the family, I was invited at a Knife-Walking ritual in the village of Pointe-aux-Piments. So I did not even have time to put my luggage down and check my room, as my host father and I were already gone again.

The ritual was exactly what it sounded like: people were literally walking over knifes, while playing music, burning essence sticks, while suffering and so on. I had never seen a ritual like this before – and I am not expecting to see many of these again in my life – and I was also not really understanding much about it either. The only thing that is for sure that is they sacrifice theirselves for their religion (Hinduism). I was told that before the ceremony those people were praying and fasting for several days, and during the ceremony partcipents would then envoken their godess whilst making a sacrifice. Walking over the swords appears to be a very meaningful and extreme ritual for hindus, in which they are seeking to prove their piety by withstanding their pain. 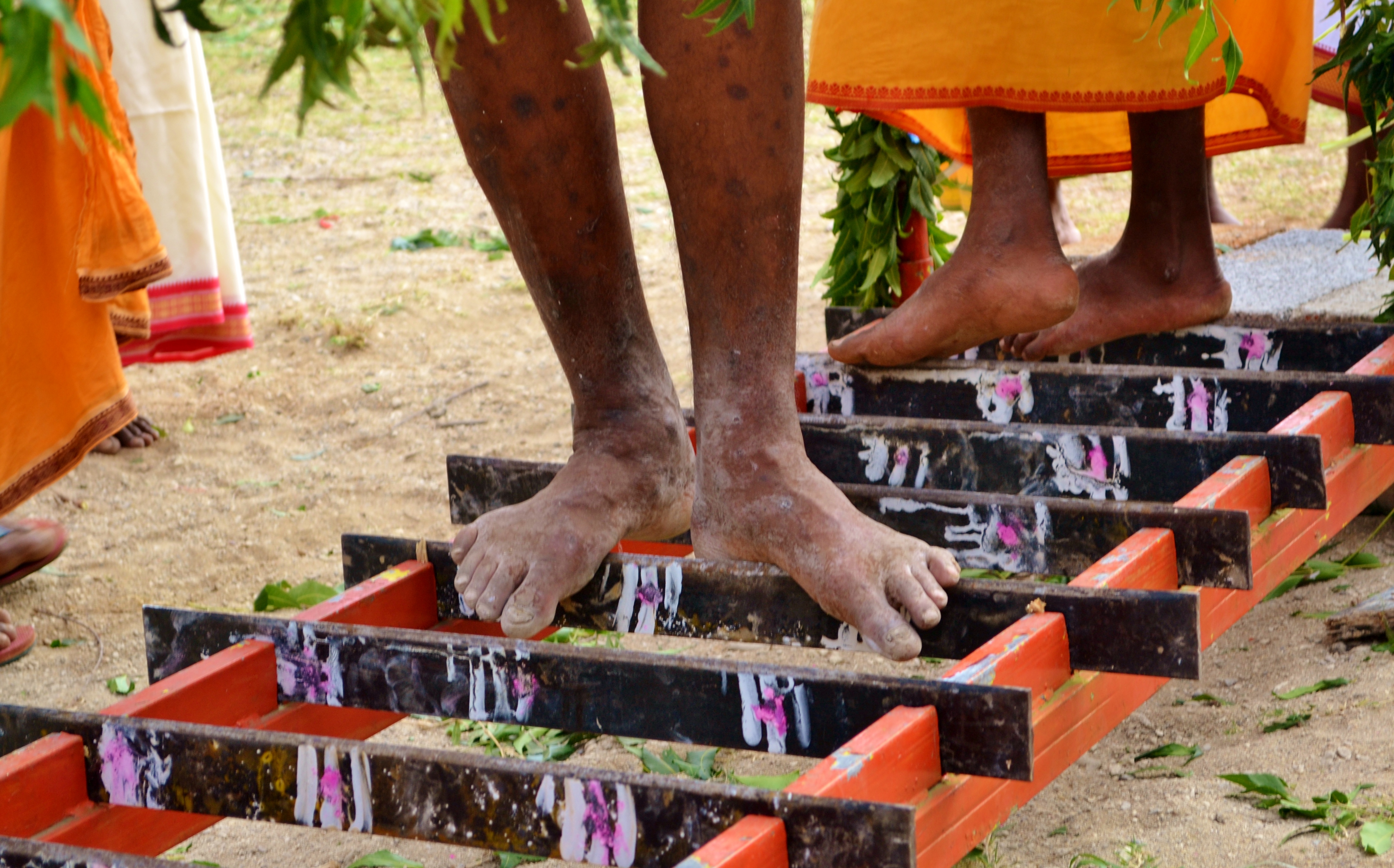 Walking over Knifes… A quite unsual religious practice in Mauritius!

Monday it was time to go to school at 9AM… Dimitris Xygalatas, the Summer School professor, an anthropologist who is very experienced in doing research on extreme rituals in Mauritius, opened the course by overviewing all practical concerns and reviewing the syllabus. I got to meet all the other students. We are with 18 students, coming from different countries such as Denmark, United States, Germany, the Netherlands, Finland, Peru, Servia and Belgium (which is represented by myself). After introducing ourselves, our field of study (we come from different degrees in social sciences, varying from Bachelors to Masters levels), the instructors also presented themselves. Apart from Dimitris, there are a few other instructors as well, who are basically research assistants or connections of Dimitris who are also researching within Mauritius. So we are a group of +/- 25 persons.

Having classes at the beach. This is The Life!

So what is this “Ethnographic Field School” all about?

Well, the course will “provide empirical training in ethnographic fieldwork through immersion into the field and engaging in qualitative as well as quantitative field studies involving a variety of methods such as participant-observation, interviews, surveys, and behavioral and biometric measures. The course also examines key methodological, epistemological, and ethical issues pertaining to the study of culture and working with human subjects. Furthermore, it involves a series of field trips and lectures on Mauritius, its diverse culture, and its fascinating history”, as it is mentioned in the syllabus.

So: again, we did not come here for 3 weeks of paradise and sunbathing, but we came to experience “the real Mauritius” (even though you can start questioning that, if you think about being a large group of Western students living closely to each other for the next few weeks).
After that first general session in the morning, we had our first lunch break and everyone was excited to get to know each other better, to overcome to culture shock and make some new friends. We decided to explore the coastal area of Pointe-aux-Piments (the village were we stay), and so we discovered our first beach at only 5 minutes walking from the classroom, which is actually located nearby a fancy hotel: Récif Attitude Hotel*** (about €90 per night for a standard room, which is kind of affordable for a paradise island!)

Well, I have to admit… It is kind of paradise here, right? And I guess not many of you reading this have lunch breaks as I am having here. So God bless the life I lead, and thank God for this amazing opportunity! But to all good things come to an end, quite fast, because lunch break was “only 2 hours” and then it was time again to return to the afternoon class. The only thing that I could think of, was that this might become an extreme ritual that people must start to practice every day and everywhere, lol.

This session an introduction about Mauritius and its culture was on the schedule, but as smart as Dimitris is (yes, we can actually call our professor here by his first name!), he started with a little quiz to test our knowledge about Mauritius, or in other words: did we read enough, and prepare ourselves well for this course? I spare you the answer to be honest… Woops! 😉

But… maybe most important, do you actually know where in the world Mauritius is located? I bet most of you readers don’t, which is actually not really a problem (because I also did not know it very well before I heard about this course and looked it up). The most important is that you know that it is NOT “one of those French islands in the Caribbean”, but that is actually “one of those islands in the Indian Ocean, near Madagascar and La Réunion”. Or to be more specific… here’s a map:

A big kiss for all of those who are so great to keep following me!

You’re the best! Thank you for all the support!