Life is full of surprises and serendipity, that’s the least I can say about this weekend. Being open to unexpected turns, brought me wonderful opportunities. I slowly start to realize that if you try to plan every step here, you might miss those wonderful twists and turns. And so I founded my next adventure on the dining table Wednesday evening… Celebrating the solstice festival with my host family in the crater of Pululahua, a – fortunately – passive volcano.

We weren’t quite sure where and when exactly we would be able to celebrate with the indigenous Ecuadorian people, but there were rumours going on and so we left Quito for the Mitad del Mundo (Middle of the World) on Saturday morning. My host father, Francisco, and another host in the house, Nicolas, decided to go camping somewhere around that evening. I took some cash in case I would find a hotel, and just for in case if not… I prepared a small back to go camping too. This would be the first time!

And so we left, for a new adventure, crossing the Equator by bus and by foot. On our way we passed San Antonio, a small town near la Mitad del Mundo, where people were already celebrating the arrival of Spring!

We had lunch in Rumicocho, where we visited the Ruinas de Rumicucho. This is an archeological site near San Antonio, constructed by the Incas between 1480 and 1500 for military and religious goals. It is also called Pucará de Rumicucho. There are 5 terraces from which you have an amazing view over the surroundings. Apart from that, it’s not that spectacular, too be honest. 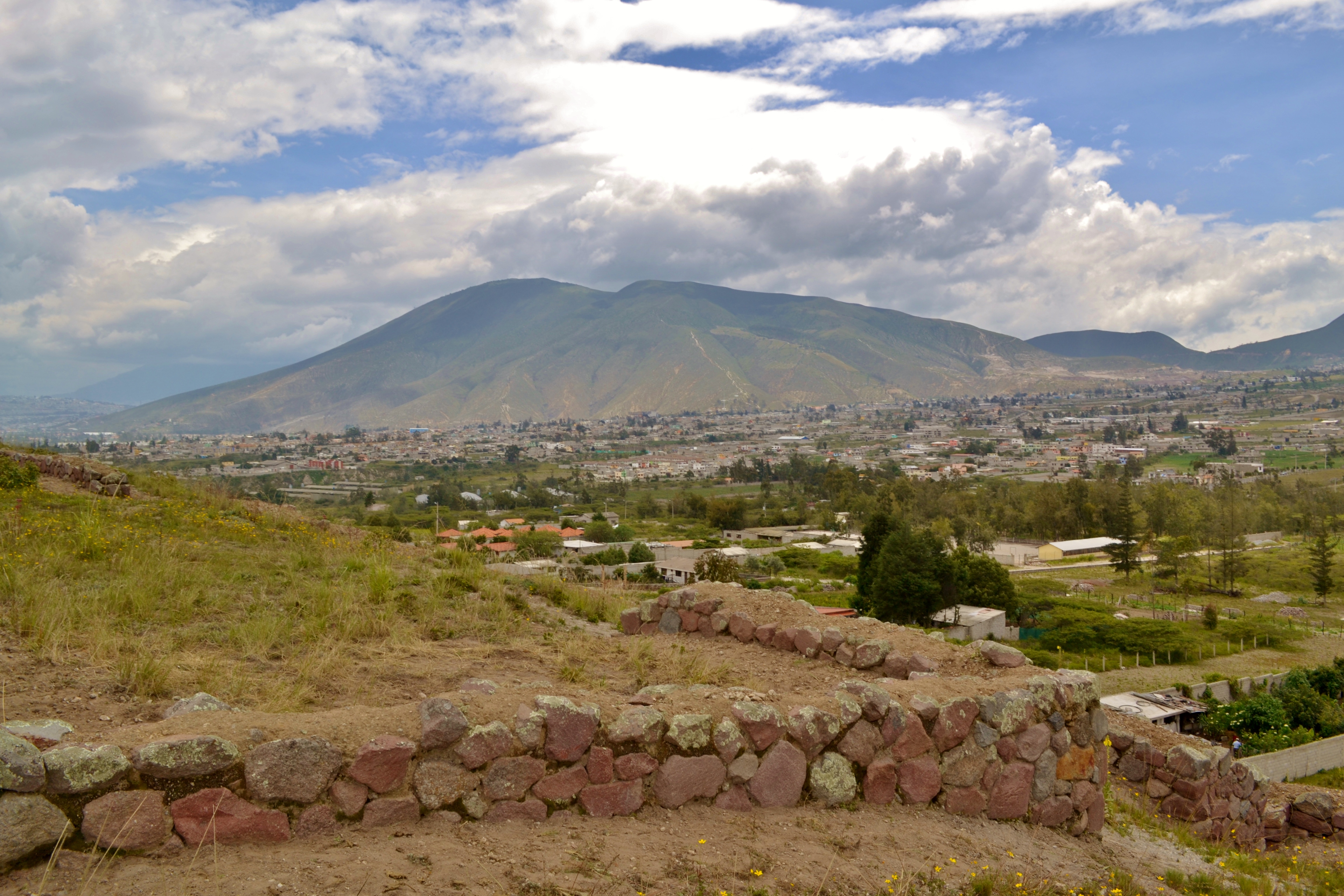 We had lunch in a local restaurant near the ruins, and I ate what I got offered (vegetarian option). I could recognize mais and cheese, but the beans I had never seen nor eaten before in my life. Miraculously, it tasted quite well and the meal filled me up entirely!

Then we headed further to Pululahua, where the celebrations would continue until late at night… We had to take  a bus and walk a while, but it was okay for my unexperienced hiking-legs. 😉

We hiked up the mountains until we walked literally into the clouds at more then 3000 meters of altitude. Amazing!

Once over there, we entered the Templo del Sol (Temple of the Sun). Around this monument, all the indigenous people gathered together to make a wonderful time. We were not even inside the temple, or we were invited to participate a guided session. Here the woman explained the magnetism of the equator (the temple is exactly located on the equinoctial line).

Inside the temple, people remember the importance of the sun for the original folks. The buildings consists out of 3 levels, in which they show paintings and sculptures that help to maintain the balance with the cosmos,  regarding the guide. 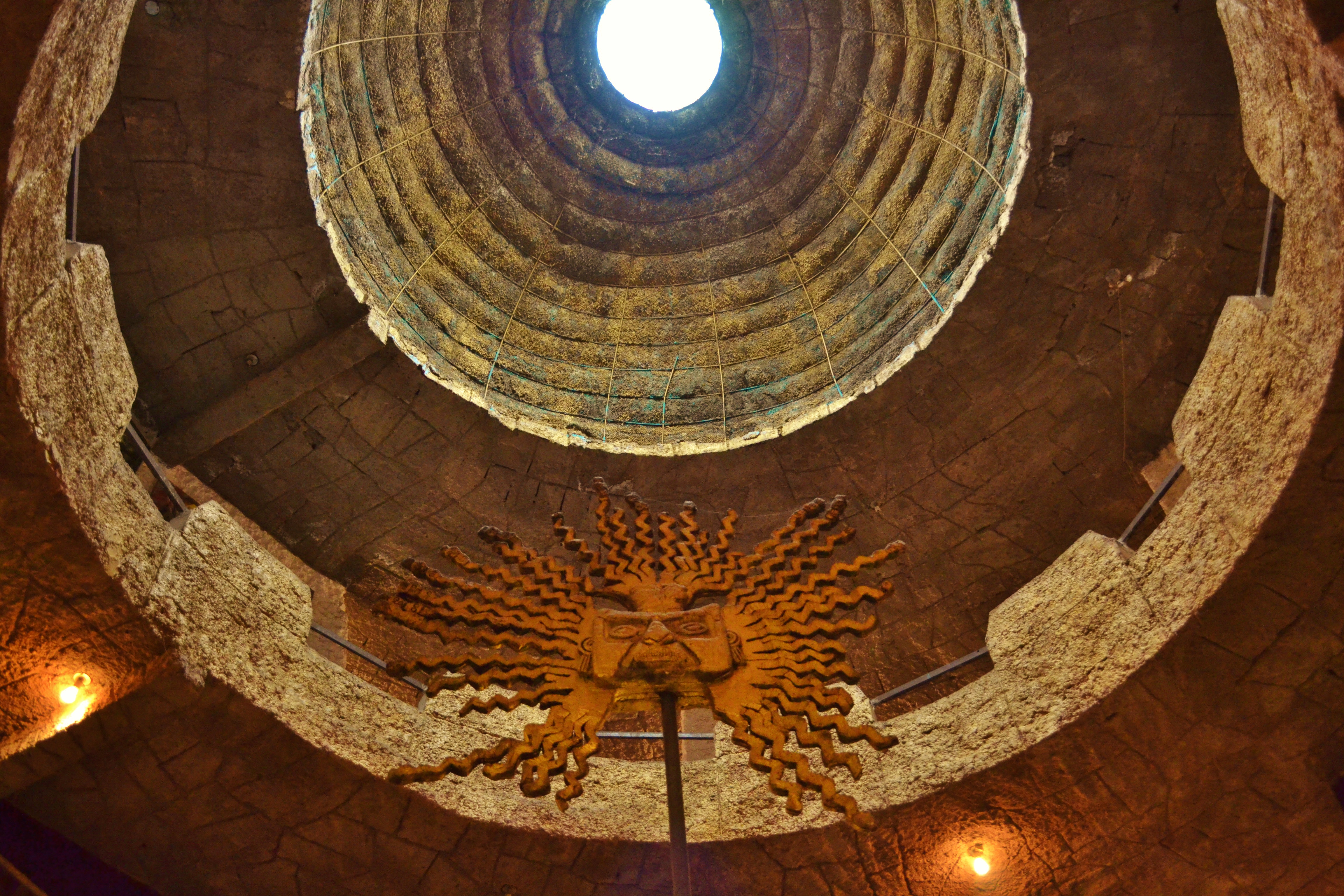 After a while, we were invited to experience the relaxing spirit of medicinal herbs and aromatherapy, combined with Andean music. We were also given a piece of Jade to improve our balance. And believe it or not, but after some random examples, we got proof that this worked.

All stones had a different meaning, and when I asked the woman to explain my stone, I was convinced that this was mend to be MY stone. Therefore, I decided to keep it and never to take it out during my trip through Ecuador. The energy would help me feel balanced. (I know, sounds a little bit crazy…)

Before we knew it, it was 7PM and time to start participating in the ceremonies. We didn’t even had time to figure out where to sleep and it was already dark. And as there were no affordable hostels nearby, I had no other choice than to camp too. But secretly, I found it exciting!

As the sun set down, the Shamans arrived for the TEMASKAL (purification with plants and stones). The indigenous were making music in a mystical way, like I had never heard before. Everybody got in a sort of trance and we all started to dance around the fire. Yes, even we, not being part of them and the only white ones here, were kindly invited to participate in the circle.

The Shamans drunk a lot of alcohol, we noticed, but they spitted it out all the time and made a sort of mist passing through our senses that stimulated our emotional state of being. This was awesome!

A little bit later the head Shaman asked for fuerza (strength) and alegria (happiness), as they were about to start the ZAPATEO POR LA PACHAMAMA (the fire walk). One by one they ‘danced’ over the fire on their naked feet. And in the background the indigenous kept playing the trance-styled music. After the Shamans all walked over the fire for various times, the public was invited to do it too.

Next, after midnight, was the TOMA DE MEDICINA SAGRADA (taking of medicine), called Ayahuasca. Here came the seriously wicked part. People start to pass bowls of this psychedelic brew of various plants, and drunk it in order to get spiritual relevations regarding their purpose on earth, and to get deep insight into how they can be the best person they possible can be on this earth. In reality, I have just seen most of them getting into another state of consciousness (hallucination). However, you have to drink sufficient before having this effects, because my host companion Nicolas tasted some, and didn’t feel any effects. It might be also important to know that the preparations made of these plants (Ayahuasca) are not under international control and are legal ‘drugs’ here.

Anyhow… The main purpose of all this celebrations was the new Andean year, which starts when the sun aligns with the earth. This causes ‘maximal energy’ and is the day of flowering, dreams and new projects. Natives celebrate it with big parties, music, dance, food and Ayahuasca drink. The party here was called PAWKAR RAYMI, fiesta of the Flowering of the Maize. They thank the bounteous provisions of PACHA MAMA, or Mother Earth, on this day in particular.

And so we went at night to set up our tent and slept shortly near the fiesta. I woke up every hour because of pain in my back and various noises, but after all I really enjoyed this experience. And so I also did enjoy having breakfast with a view in the nature the next morning. (And I even pipi’ed in the wild!!) 😛 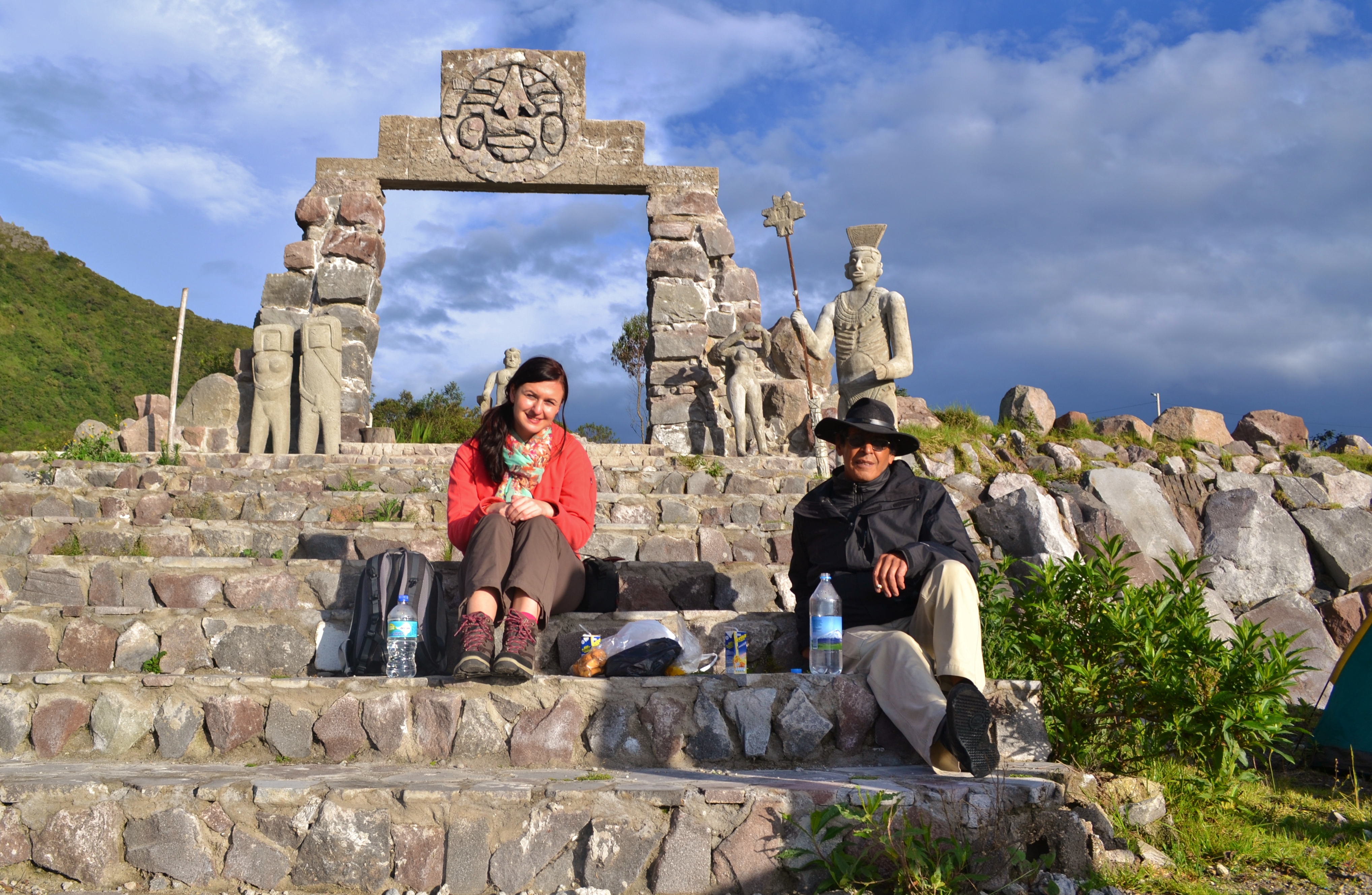 Early in the morning there were no clouds and we walked into the crater of Pululahua, one of the reasons why we came here.

The views were amazing and I founded them even more beautiful than on the pictures I’ve seen on Google before coming here. Lol. 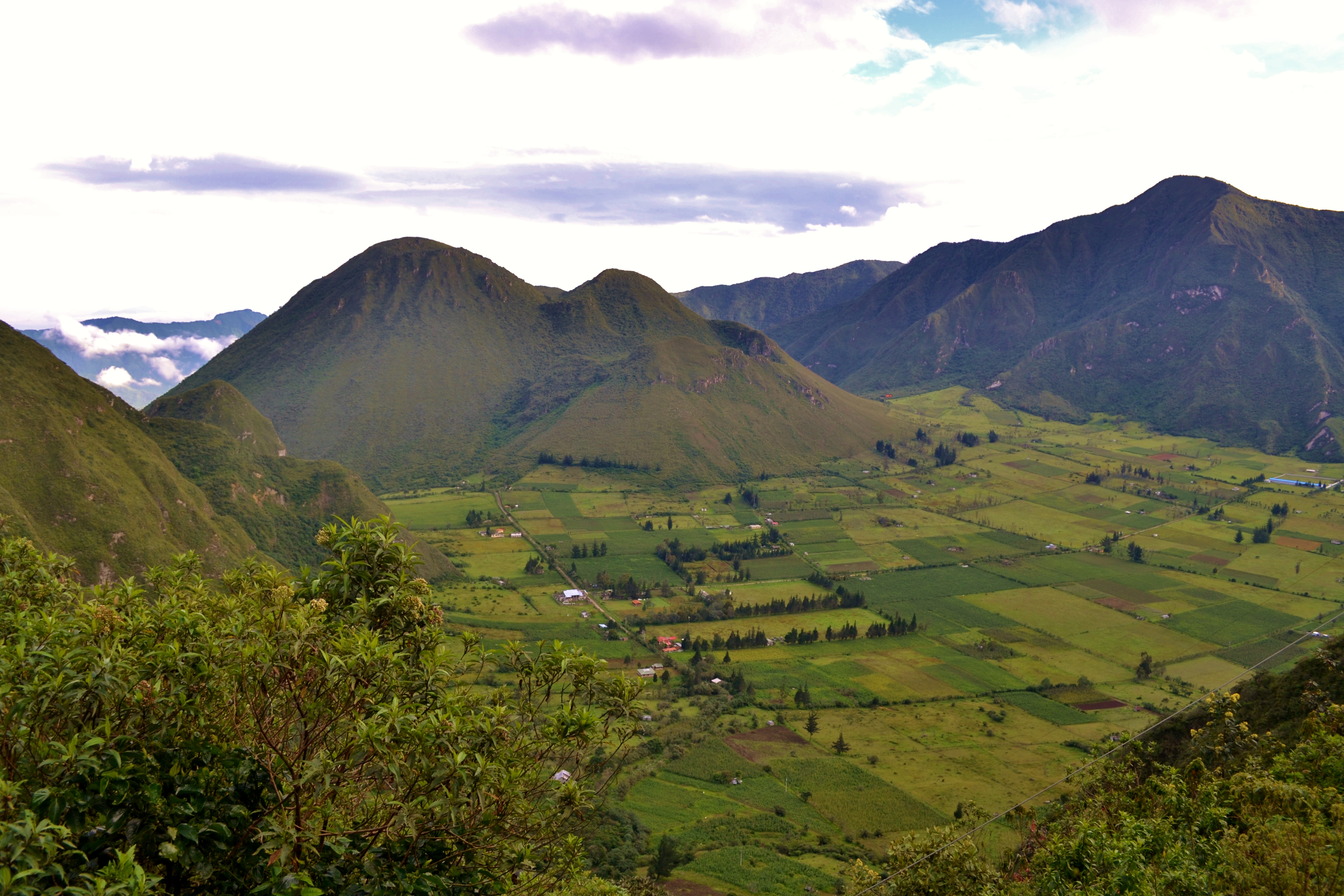 It was a pretty steep hike down into this passive volcano, but the views were UN-BE-LIEV-ABLE!

Hiking up was something else in this altitude and steepness. I had to hold breaks every once in a while to control my breathing and heart rate, but it was all worth it! Definitely!

By the time we returned to the Temple of the Sun, the celebrations started all over again. Or actually, did they ever stop? No, because a group of guitarists kept playing all night through… 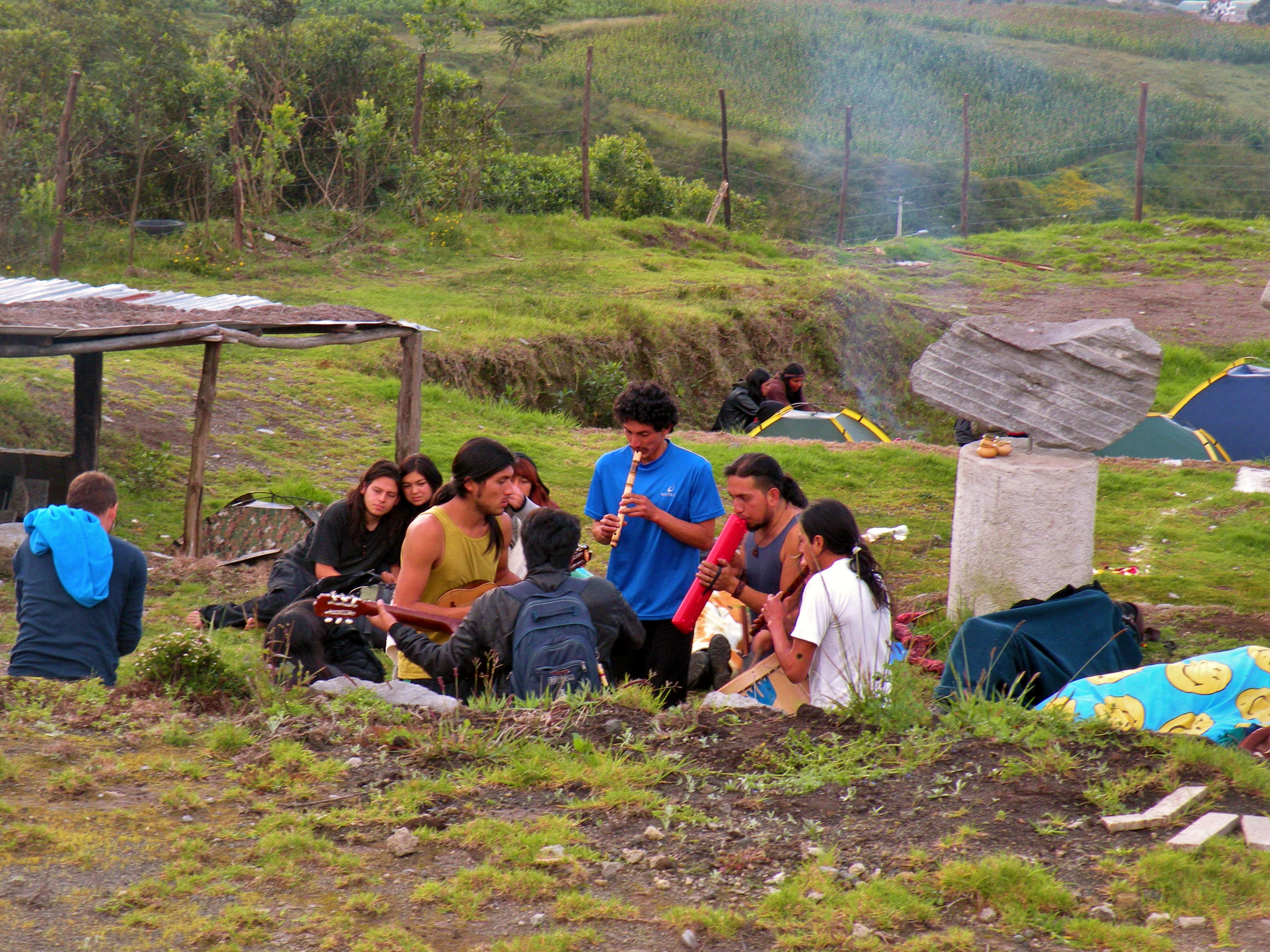 Now arrived groups of children in typical clothing to perform some dance and celebrate with their families.

Unfortunately, it was time for us to break up the tent and pack our stuff. We had experienced lots of amazing things, but the lack of sleep made us longing for home and shower. And the way back was still long… 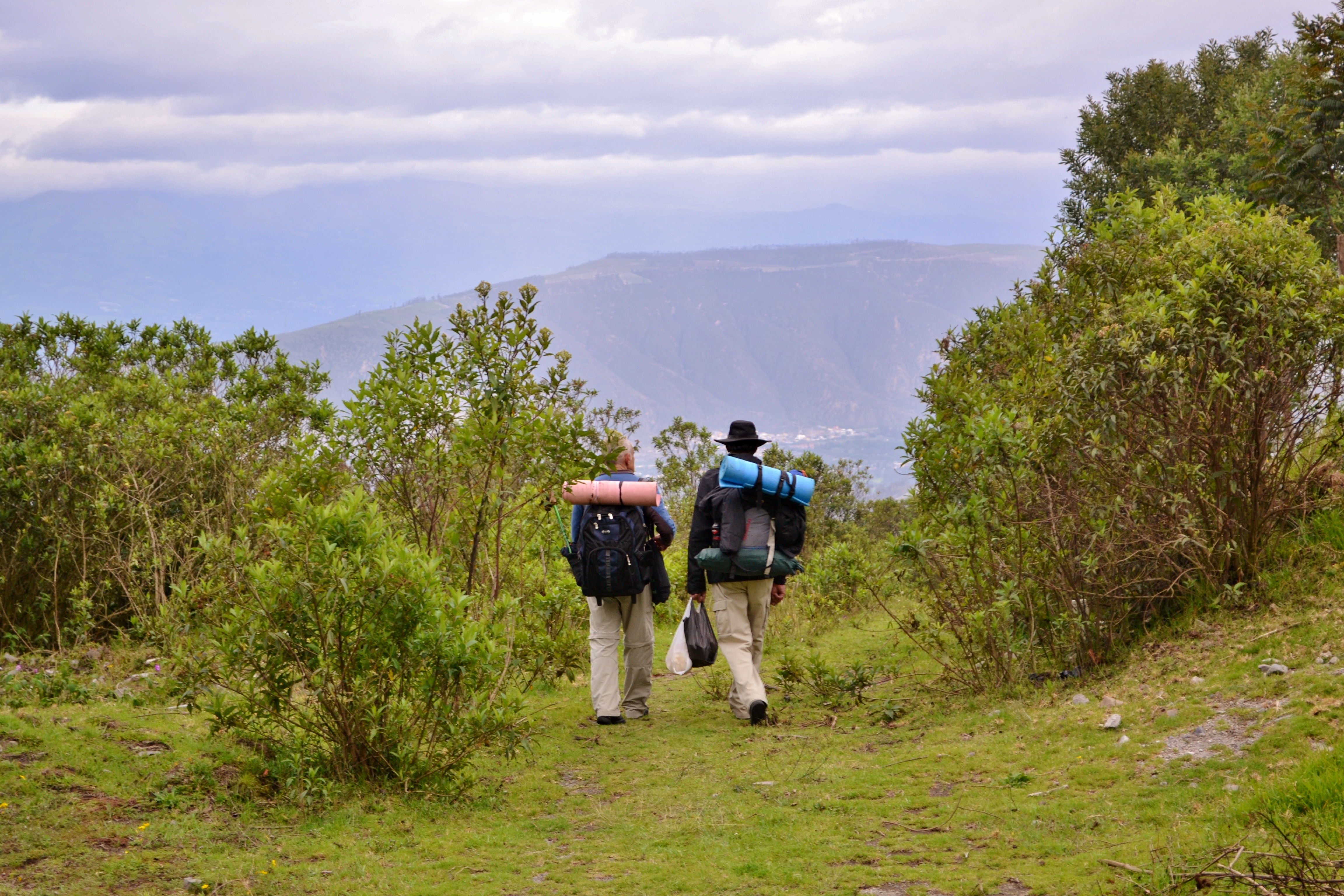